Wapiti, WY (November 5, 2018) — One man’s idea turned into a stirring memorial for hundreds of motorcyclists who have died in Wyoming. Ironically, the motorcycle memorial sits across the highway from a tragic accident that killed three bikers.

Downtown Cody sees plenty of visitors on their way to Yellowstone and Grand Teton every summer, including bikers who tour the Parks, and other scenic areas of Northwest Wyoming.

In June, 2016, three German bikers were killed when a pickup truck driver veered into their lane and hit them head on. 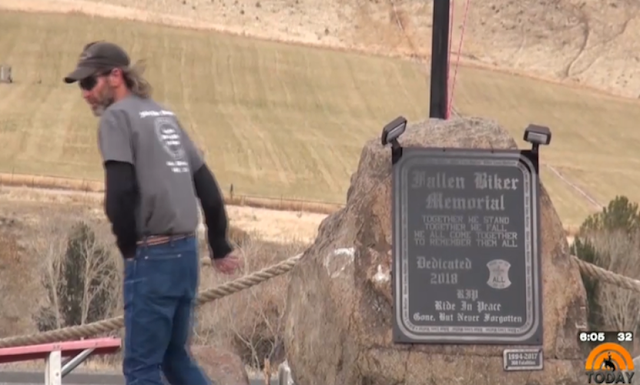 “This was a tragedy that still haunts people in the Cody area. These were visitors in the Cody area.” Said Wyoming Department of Transportation spokesman Cody Beers. Beers remarked too many bikers are dying on Wyoming highways.

Michel Degleau is a biker, and he’s lost biker friends on Wyoming Highways

He decided to build a memorial to motorcyclists who have died, and friends offered to let him use their land in Wapiti, directly across from the site of the 2016 triple fatality.

“It’s just pure coincidence that that is there, but that just adds to the nostalgia of the memorial.' Degleau remarked. "That just shows people we got a memorial, and we got three fatalities right across the street.”

Degleau held a fundraiser to buy the materials, and got some help from friends to build it. He put the final touch of a flag two weeks ago. Even while he was building the memorial, Cody businessman Joe Boydston died in a motorcycle accident north of Cody. Deglau turns on flashing lights at the memorial when a biker dies. He heard about Boydston’s and another biker’s death at the same time.

“So, I had the lights flashing for Joe and the other guy. And I put pictures on the Facebook page. I was out here working and I looked up and there was a double rainbow.” He said.

Beers said the memorial may help remind drivers to watch for bikers, and remind bikers to drive safely. WYDOT posted signs near the Memorial to encourage drivers to visit it.